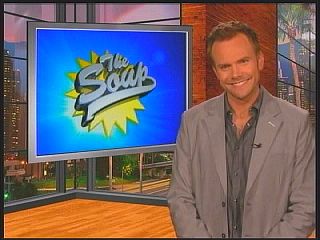 "It's like the Johnny Carson of...whatever."
— Herman Bailey (of "Herman and Sharron")
Advertisement:

First, starting in 1991 there was Talk Soup with Greg Kinnear (and various other hosts after him: John Henson, Hal Sparks, and Aisha Tyler), which mainly focused on making fun of talk shows. That ended in 2002 when most of the companies airing the talk shows stopped providing clips. Apparently, they thought it was giving them a bad name. Unsurprisingly, these shows were gone after a couple of years.

Then, in 2004, E! aired The What The? Awards which was quickly changed to The Soup with host Joel McHale. They even acknowledge the original Talk Soup with the segment "Chat Stew".

Regular characters on The Soup include Mankini (a man wearing a bikini), a dancing maxipad, two Star Wars nerds, and Lou the chihuahua. Regular segments include "Chicks, Man", "Reality Show Clip Time!", "Let's Take Some E!", "Oprah's Vajayjay", "Gay Shows" and the "Clip of the Week", the last of which, is the only true remaining bit from Talk Soup. It doesn't take itself too at all seriously.

Four spinoffs have been launched on the majority of Comcast's other cable channels since 2008:

The Series Finale aired in the US on December 18, 2015. In 2018, Netflix began airing The Joel McHale Show with Joel McHale, a show similar to The Soup (Mankini is now One Piece Man). It was canceled after one season.

Want More Clips? Watch The Damn Shows Yourself. (The Stinger on the Series Finale)