"Not Making This Up" Disclaimer 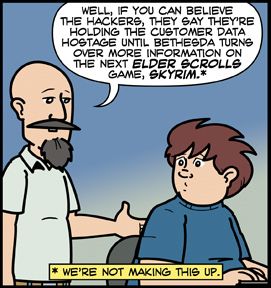 "I am not making this up. I couldn't on my BEST day make this up. It would be my greatest dream of dreams to be able to come up with something this INCREDIBLE!"note About being told to add a beach ball to a gruesome neck-snap scene.
— Scott, Extra Credits
Advertisement:

Someone working on a show thinks the audience might not believe that the Truth in Television shown or described is actually real. It's not that the writer thinks the audience is stupid. It's that the thing being shown actually is ridiculous or silly enough that there is good reason to think it's not real. So the writer includes a disclaimer directly to the audience. Sometimes this is Breaking the Fourth Wall, but often it's a non-fiction show. Either way, this is making sure the audience knows this is not a joke: whatever is shown actually is that way, even if it sounds unbelievable or exaggerated.

This is often to avoid Aluminum Christmas Trees. If the fact is particularly unpleasant for one reason or another, variations on "I wish I was making this up" are likely.

Poe's Law can also invoke this trope if only to distinguish the made-up parody from the real deal. Then again, maybe not...

For this reason, if done badly, especially on purpose, this trope becomes indistinguishable from Suspiciously Specific Denial.

Compare Who Writes This Crap?!, Take That!, Reality Is Unrealistic, Not Hyperbole, A Rare Sentence.

See also Lampshaded the Obscure Reference. Cassandra Truth is an example when the characters discuss this In-Universe to each other. Spoofed with Their Own Words is when a parody quotes dialogue word-for-word to make fun of how absurd the original material already sounds.

This trope applies to In-Universe Examples Only. Do not Pot Hole to this page in an attempt to deny an event has been fabricated, or to express your disbelief concerning something stated in a given work. Instead, link to the proof that the event happened (like the picture caption), quote the unlikely passage from the work in question. If neither are possible, pot-hole to Sincerity Mode instead.

Alternative Title(s): I Am Not Making This Up Disclaimer