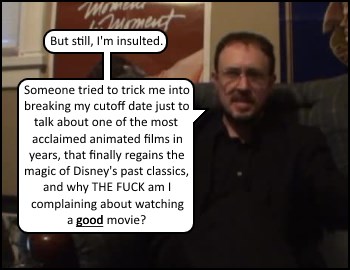 Yeah, it's not as though you were asked to review one of the Direct to Video Disney sequels.
"Here it is, the song that gave everyone in the audience larynx envy. I still hear Lloyd belting it around the house sometimes."
— The Cinema Snob, commenting on "Let It Go"
Advertisement:

The Cinema Snob is told there is an exploitation film called Elsa, Snow Queen of Arendelle, and instantly knows it's really Frozen. Being well past his cutoff date would make it ineligible for review, but since he would get to watch a good movie, he goes ahead anyway in his typical style (which means this comic is Not Safe for Work).

This fancomic uses screencaps similar to Campaign Comics (such as Knights of Buena Vista, which is by the same author).

The comic was posted in 28 pages, in three parts. Sadly, the site that housed them has been taken down, and the comic is much harder to find.

However, several images have been uploaded to Know Your Meme:

It can also be found partially archived here