Too Smart for Strangers 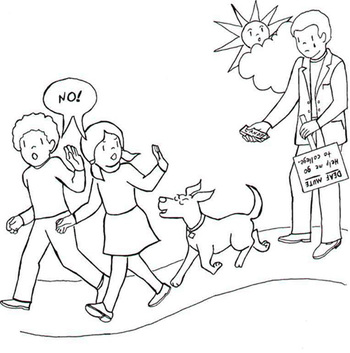 "Don't be fooled by tricks!"
"Kids, there's nothing more cool than being hugged by someone you like! But if someone tries to touch you in a place or in a way that makes you feel uncomfortable, that's NO GOOD! It's your body; no one has the right to touch you if you don't want them to. So what do you do? First, you say 'NO!' Then, you get outta there! Most important, you gotta tell someone you trust, like your parents, your teacher, a police officer."
— Sonic the Hedgehog, Adventures of Sonic the Hedgehog
Advertisement:

A Very Special Episode with a moral about a very important issue: all adults that you don't know are ravenous, sex-thirsty child molesters waiting to lure you into the back of their white van with promises of candy and toys. This Aesop came along in The '80s as child abduction and abuse, particularly in the wake of the 1981 abduction and murder of 6-year-old Adam Walsh

, became a national concern in the United States and shortly thereafter there was a nationwide panic about Satanic cults that were alleged to be kidnapping and sexually abusing children (though after extensive investigation, no such cults were ever actually found).

Of course, being childrens' TV shows, they have to discuss these issues in a way that's easy to understand, but without being scary — which usually just ends up being awkward. Really awkward. They can't mention any of the "worst" crimes (e.g., molestation) by name, so they generally stick to just kidnapping or "being touched in a way that makes you feel uncomfortable" (and, all together now, that's nooooo good). Expect the most graphic euphemisms you can get onto suitable-for-all-ages television, such as the "bathing suit area."

For these reasons, the bulk of the show tends to be either about "safety tips" like never talking to strangers (which usually refers to strange adults, mind you) and rejecting all forms of generosity, or about a Card-Carrying Villain kidnapper and the more fantastical things he does to his victim.

It's also worth noting that in the vast majority of child kidnappings and sexual abuse cases, the abuser is not a stranger but someone the child knows and trusts, usually because they have easy access to the child and, in custody cases (which are almost all kidnappings) the kidnapper has something to gain by kidnapping the child. The fact that this Aesop is based on faulty information renders it almost entirely useless, so it fell out of favor by the end of The '90s. A couple of high profile cases where lost children actively hid from the police or other adults trying to find and rescue them as they'd had it drilled into them that all strangers were dangerous and would kidnap them given the opportunity put the final nails into the simplistic interpretation of this idea. These days, experts advise caregivers to warn their children against "Tricky People

" rather than "Strangers," putting the focus on suspicious actions rather than on whether you know someone.

Guaranteed to be utterly uncomfortable, as happy-go-lucky, fun-loving characters are forced to deal with a truly horrifying eventuality. May have the side effect of making some children unbelievably paranoid, especially if they themselves have had it happen by someone they know and trust. And Heaven have mercy on your psyche if the writers decide to disregard the "don't scare the crap out of the kids" part.

Compare Drugs Are Bad, another favorite kids-show message in the 1980s.