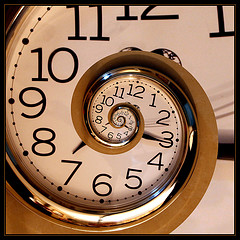 We have entered an endless recursion of time.
"Well, what if there is no tomorrow? There wasn't one today!"
— Phil Connors, Groundhog Day

A plot in which the character is caught in a time loop, doomed to repeat a period of time (often exactly one day) over and over, until something is corrected. Usually, only one character or group of characters realizes what's going on, or at least has an odd sense of Déjà Vu — everyone and everything else undergoes a complete Snap Back, and if not interfered with will do the exact same things every time, right down to dialogue.

Once the character realizes this, two things happen, usually in this order:

A Groundhog Day Loop episode can often be identified by the presence of several odd little events that are given full camera focus, yet don't have any apparent significance or relation to anything else. These are, of course, the events that will later be replayed in exactly the same order to emphasize that the day is, in fact, repeating in every particular. (Almost invariably, the looping character will at some point demonstrate his or her "prescience" by offhandedly predicting these events one after another.)

Since this plot requires constantly revisiting handful of sets for the entire length of the episode(s), re-using some of the same footage over and over and generally no outside characters will act on the plot, this can be considered a form of Bottle Episode.

Though not the earliest example, this trope is named after the film Groundhog Day, which established the trope in popular culture. Compare New Game+ and End Game Plus for Video Games.

Requires Ripple Effect-Proof Memory to be in play for any meaningful plot to take place.

Be wary of spoilers, too: the very existence of a "Groundhog Day" Loop can be a spoiler in itself.

James May gets shot.

James May attempts to steal a Renault but he gets shot by a sniper. The whole sequence is repeated multiple times, and Richard lampshades this.

James May gets shot.

James May attempts to steal a Renault but he gets shot by a sniper. The whole sequence is repeated multiple times, and Richard lampshades this.