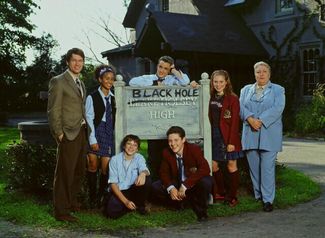 Also known as Strange Days at Blake Holsey High in the United States, Black Hole High is a Canadian Science Fiction series created by Jim Rapsas, best known for developing and producing a vast amount of the programming that aired on Discovery Kids in the United States. The show first premiered on Global TV in Canada before airing on the aforementioned channel. The show lasted for three seasons consisting of 42 episodes, starting in October 2002 and ending with a three-part Grand Finale in January 2006.

Back in the 1980s, an accident at nearby Pearadyne Labs results in a black hole (sometimes described instead as a wormhole) opening up in the science teacher's office at Blake Holsey High in the present day. When said black hole eats the science teacher, Professor Noel Zachary replaces him and becomes mentor to the school's science club, who proceed to investigate the strange goings-on at their school. This club being a team consisting of four scientifically gifted students and the son of Pearadyne Labs owner Victor Pearson. Cue the experiencing of random mysterious phenomena which are presented in the guise of science as they try to uncover the secrets behind the strangeness.

In some ways, Black Hole High could be considered Buffy the Vampire Slayer with the word "supernatural" crossed out and "science" penciled in (though with the non-violent and non-sexual baggage implied by its younger target audience).note The second episode, "Invisible", for example, is a near-identical copy of the Buffy episode "Invisible Girl"; the key difference being that, rather than attributing a character's disappearance to magic, the nearby black hole caused it to be that Marshall would, as a result of feeling unnoticed, lose his ability to interact with light. A fairly recurring element in the show is that one's emotional state and social interactions can reshape the laws of physics.

In addition to the weekly anomalies, the show was built around a series-long Myth Arc involving Victor Pearson's attempts to recreate the Pearadyne Labs experiment, and the club's attempts to work out the sinister implications therein.

The series shares a number of actors with Disney-produced shows of the same time period, and bears a significant structural similarity to So Weird. Henry Winkler served as an executive producer and consultant on both. Stars pretty much the same cast as The Zack Files, another Canadian paranormal live-action kid's show.

that the creator was bringing the series back for a web show entitled Strange Days at Blake Holsey High: Echoes. It's slated for release in the Spring of 2022.

Has a Character sheet and a Recap page which are under construction.