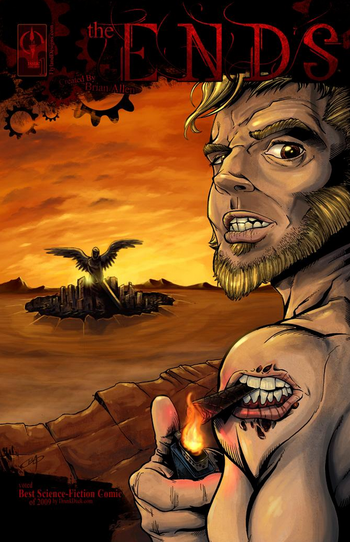 is a Post Apocalyptic Webcomic/graphic novel by Brian Allen. Running from February 2009 to December 2009, it tells the story of the "survivors" in a postapocalyptic wasteland, living in a town named "The Ends".
Advertisement:

The town seems caught in some kind of "Groundhog Day" Loop caused by a nuclear explosion, as every person who dies is reborn within hours as an apparently identical clone, but with Identity Amnesia. Mutated creatures haunt the wasteland, and there is an ongoing conflict between winged humans called "angyls" and ordinary humans, given the derogatory label "landwalkers".

The protagonist is a man named Jason who has managed to recover some of his memories after being reborn, most especially his love for a woman named Isabella. He also has, for some reason, a mouth embedded in his left shoulder that dispenses helpful advice. Jason's memories may be key to unraveling the time loop.

The comic is fairly violent and there are graphic scenes of gore and mutated creatures, including humans.

Not to be confused with a similarly titled webcomic, The End. Or with the two freeware games with the same name.