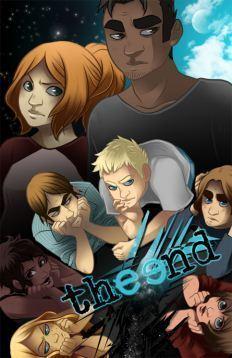 is a Science Fiction webcomic which begins with Endi, a member of the birdlike spacefaring Fiah race, facing his first assignment in the prestigious role of Navigator, on a Fiah sub-ship on a mission of the highest importance. His assignment, to participate under the review of a superior Monitor in the legendary Exodus project, evacuating a self sustaining population of an intelligent race from a doomed planet. The species to be saved: Humanity.

Unfortunately, things start going wrong from the outset. Rather than landing in a densely populated city as intended, Endi's ship, the Axca, lands in the middle of nowhere. Under the supervision of Ethma, his Monitor, he relocates the ship to a suitably populated area, which just so happens to place their ship right outside of a Sci Fi Fan Convention. The situation continues to disintegrate as the ship's cloaking device proves non-operational, and several humans wander into the ship uninvited. In a desperate attempt to salvage the mission, Endi flies the ship off-planet, but finds that he's not alone in his troubles when a mysterious disaster wipes out the rest of the Exodus fleet. As the only remaining members of the Exodus, Endi and Ethma are forced to look after their party of human stowaways who may never be able to return home.

The End provides examples of: