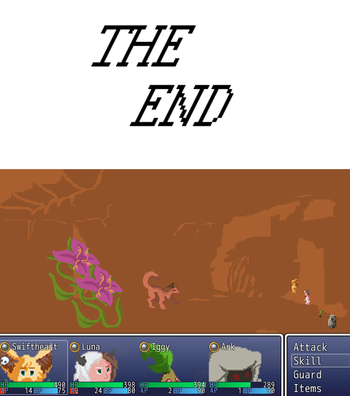 Part of a menu screen, and one of the post-transformation battles.
Advertisement:

The End is a 2015 freeware Role-Playing Game made by Aegix_Drakan in RPG Maker, originally for the MOG 2015 contest on the RMN website.

It uses the same "Aggression" combat system as his earlier game, Illusions of Loyalty, where each of the four characters has 6 skills divided into 3 groups by their power, with the more powerful skills requiring both Stamina Points (SP) and "Aggression" built up by weaker attacks, or by taking damage. Moreover, the skills are often distinct from the usual fantasy ones, and come with unique trade-offs, requiring effective synergy at higher levels.

Meanwhile, its story begins at the end of the traditional fantasy narrative, as the human Hunter Swiftheart, Elven Hex Hunter (and Swiftheart's lover) Luna, Rebel Imp Iggy and rebel Death Magus Ark are Storming the Castle of the story's villain, Orion. The battles with his remaining loyal guards and their final confrontation all neatly detail how much power he used to have, and how he lost it all through being a massive jerk. You kill him in a worthy battle, and see the credits, over the scenes of the newly peaceful life.

Is the game really going to be over in 10 minutes?

Then, the story picks up a little while later, as Swiftheart is late to a date with Luna, and takes a trek through their peaceful town on the way, able to admire the beauty of the peaceful life. Suddenly, however, he undergoes a ridiculous Baleful Polymorph transformation (which thankfully leaves his combat capabilities unharmed) and same happens to Iggy. They suspect a prank from Ark's adopted son Theo at first, and show up to visit his old tower...only to discover all of its traps and defences have somehow been reset exactly to what they were before. Stranger events happen still, as the game slowly starts living up to its title.

NOTE: The game is rather short, and while the page here has spoiler tags, reading the names of examples before playing can nevertheless reveal notable story elements.

Not to be confused with the other game named The End (2012) with a page on this wiki. Or with either of the two sci-fi webcomics.

The End provides examples of the following tropes: