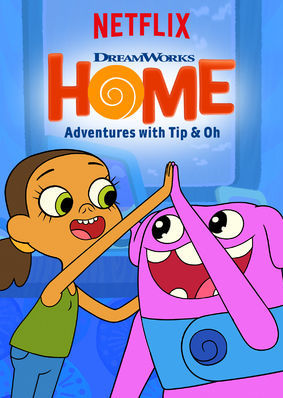 I never knew how good a friend could be
All alone, I was searching the galaxy
You came along and completed our family
We're better together now that we've found our way
Home!
—Theme Song
Home: Adventures with Tip and Oh is a Netflix cartoon by Dreamworks Animation based on Home (2015). It started on July 29, 2016, and ended on July 20, 2018 after four seasons and 52 episodes.
Advertisement:

Following the events of the movie, Oh abdicates his position as Captain of the Boov, naming Kyle the new "King of Police" to move in with Tip as her adopted brother as the duo try to make it in a new world where Boov and Human co-exist while dealing with the vengeful former Captain Smek.

Home: Adventures With Tip and Oh provides examples of: