The Worst Seat in the House 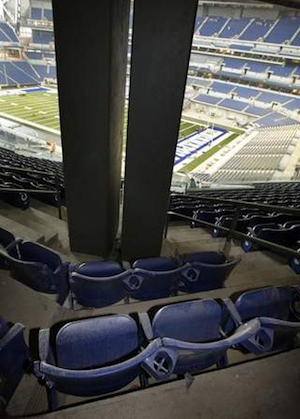 You get a great view of the action from here!
Arnold: Can you see anything?
Gerald: Yeah, one of those little dots is running past one of those other little dots.
— Hey Arnold!
Advertisement:

When a character wants to attend an ultra-high end event but is on a budget, they will somehow find tickets at a price so low that it's too good to be true. They will make their way to the show believing they got the deal of a lifetime, until they actually get to their seats and one of two things become apparent:

Sometimes, the characters are motivated to attempt to sneak their way into empty seats closer to the front row. Occasionally, the heroes are successful and manage to get bonus preferential treatments, possibly even finding their way into a player locker room or backstage area at a concert and getting to personally meet their heroes. Other times, they might be foiled by the dreaded venue ushers and ordered to return to their original seats.

In a small variation, the seating is fine, except for a large or tall person or someone wearing an obscenely big hat blocking a character's view. That character will then struggle in vain to try and see over the person in front of them, likely creating additional disruptions for everyone else around themselves as they try to get a better view around the obstructing person.