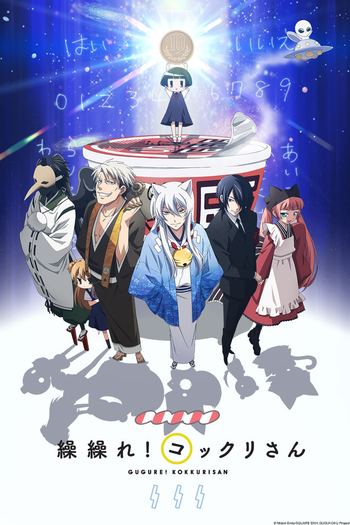 Kohina Ichimatsu is an elementary school student who calls up fox spirit Kokkuri to ask questions as part of a divination game. Unfortunately, she ignores the rules and does it alone, so Kokkuri shows up in person to haunt her... and ends up being so horrified by Kohina's solitary life that he appoints himself her Parental Substitute.

Gugure! Kokkuri-san is a yonkoma comedy manga by Midori Endō, which ran in Gangan Joker from 2011 to 2016 for a total of 114 chapters. An anime by TMS Entertainment started airing as part of the Fall 2014 Anime season on October 5th 2014. It's licensed in the US by Sentai Filmworks.