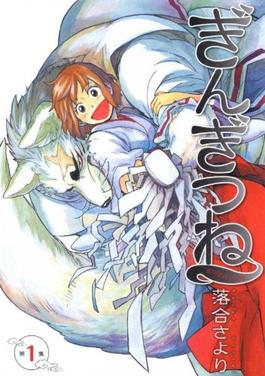 Gingitsune (ぎんぎつね lit. Silver Fox) is a fantasy slice of life Seinen manga series written and illustrated by Sayori Ochiai. It was serialized in Ultra Jump from 2009 to 2022, and compiled into 18 volumes.

Makoto Saeki is the daughter of a shrine priest in a small Inari Shinto shrine dedicated to the God Ukanomitama. Despite being the fifteenth generation heiress of the Shrine, she is living a good life after her mother died. However, she has an unusual gift when she met the messenger of the god Inari: an anthropomorphic fox named Gintaro, declaring her the successor. Gintaro can see a short glimpse into the future and find lost things despite being rude and unmotivated, but still developed a good friendship with Makoto. As she is the only girl who can see the spirit, both of them decide to be a go-between for the gods and humans as they try to help those who come to the shrine.

The manga has sold over 1 million copies in Japan. An anime adaptation aired from October to December 2013, spanning 12 episodes and covering the first 3 volumes of the manga.

The anime is watchable on Crunchyroll