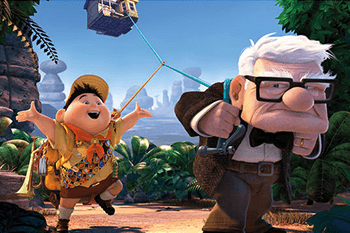 Ernie: (chuckle) I feel so good I'm laughing!
Bert: Me, I'm feeling crosser than a bear.
Ernie: Do do do do do do, I feel wonderful!
Bert: (angrily) And I! Don't! Care!
— Sesame Street
Advertisement:

What happens when you combine The Pollyanna and a Grumpy Bear? You get a Gleeful And Grumpy Pairing. Often a source of comedy wherein the gleeful character gets the grumpy character into wacky situations that the former never would have thought of. But they can also be a great source of heartwarming moments, where the optimist can bring out the best in the grump... Or it could backfire, and the grump could bring out the worst in the optimist.

A Sub-Trope of Odd Couple and Red Oni, Blue Oni. Compare Cynic–Idealist Duo, where the dichotomy of the characters come from their externalized world views, rather than internalized personalities, Tomboy and Girly Girl, Sensitive Guy and Manly Man or Rude Hero, Nice Sidekick. Sister trope to (and known to overlap with) Ham and Deadpan Duo and Straight Man and Wise Guy. Smart Jerk and Nice Moron can also, and almost always does overlap with this trope, difference being the duo contrast in intelligence as well as temperament.