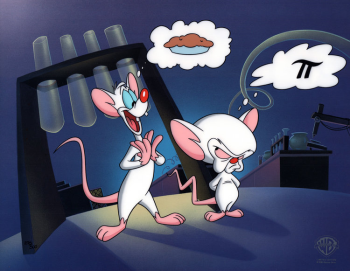 "Time heals all wounds, Pinky, except the one in your head."
A trope about a duo in which the smarter, more aggressive individual bullies their dumb but pleasant comrade.
Advertisement:

They're usually in a commander-henchman type scenario, though this isn't mandatory, nor is the smart guy necessarily all that brilliant or successful. The important part is that they know they're the smarter of the two and mistreat the slower one. Their relationship holds because the less intelligent one is unaware that they're being treated unfairly and remains something of an Extreme Doormat, not always out of weakness, but ignorance.

A relationship-based variety of Dumb Is Good, often overlapping with Vitriolic Best Buds. Often, the smart one is an Unsympathetic Comedy Protagonist (or an Academic Alpha Bitch in a school setting) and the dumber one is his Bumbling Sidekick. If they are a Vile Villain, Laughable Lackey, the dumber one is his Minion with an F in Evil. This dynamic is the heart of the Boke and Tsukkomi Routine.

Sub-Trope (child trope) of Kindhearted Simpleton and Insufferable Genius. Compare Brains Evil, Brawn Good which is a correlation between intelligence and morality, and Anti-Intellectualism. Compare and contrast Straight Man and Wise Guy and Comic Trio; this trope is distinguished from both by a lack of the Only Sane Man, as both characters generally contribute to goofy antics in different ways. Supertrope to Fat and Skinny and Big Guy, Little Guy, which have a similar dynamic emphasized by a physical difference between characters. Rude Hero, Nice Sidekick is a hero-specific variant that is not necessarily comedic.

Andrew and Lloyd show off their contrasting personalities.

Andrew and Lloyd show off their contrasting personalities.