South of the Border 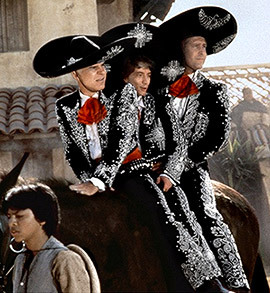 ¡Arriba!
"The mariachis would serenade,
And they would not shut up till they were paid.
We ate, we drank, and we were merry,
And we got typhoid and dysentery."
— "In Old Mexico", An Evening Wasted with Tom Lehrer
Advertisement:

Ah, Mexico. Home of the bustling, ancient and modern Mexico City, the gritty and industrial Monterrey, Puebla and its multiple hundred years of Spanish colonial history, the city called Guadalajara that mixes all the previous ones and adds a technological corridor, the heavenly beaches of Cancún and Los Cabos, the magnificent mountains of central Chihuahua and Durango, the lush wilderness of Yucatán... and a bunch of other stuff the American media has barely heard of.

In American media, Mexico is known for the Dí­a de los Muertos, sombreros, lazy locals, burros (donkeys), tequila, chupacabras, luchadores, piñatas, chili, incredibly spicy food, lots of beans, and a bunch of rundown, filthy adobe huts in the middle of the desert or desperately poor, grubby towns that American criminals will escape to.

As per this trope, the population of Mexico comprises six types of people: kidnappers, kidnappees, corrupt police, rich landowners, people without money and people who claim that the country is going down the drain, but do nothing about it. Go back a few years, and you'll also find Bandidos.

If you are a White Anglo-Saxon Protestant (and heroes often are), don't go down alleys, you will be surrounded by big, smirking, sweaty bullies who jeer and mock in Spanish, the only intelligible word being gringo (Roger Ebert's book names these guys the Latino Laughers). You'll have to fight them.

Oh, and don't drink the water.

If you turn the clock back several centuries, expect to find jungle, terraced pyramid-temples, elaborately costumed high priests with obsidian blades who are really after your heart, and maybe some greedy conquistadores.

Occasionally, may be further obfuscated with other Central and South American countries into a greater Latin Land, or with Spain into Spexico. South of the Border is a proud member of The Savage South.

Most Mexicans actually do not mind the common stereotypes and will either admit to them or, in the best of cases, accept them with open arms. Poor use of the stereotype isn't unheard of, though. And no; like all stereotypes, not all Mexicans are like that.

Note: This has nothing to do with the Fireworks Store and tourist trap, South of The Border, located 400 feet south of the North Carolina—South Carolina border.