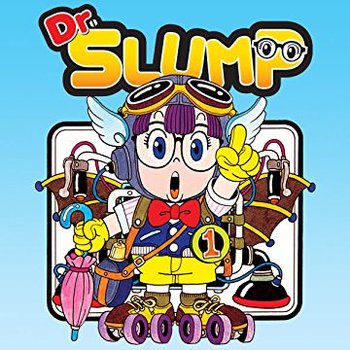 A classic gag manga and anime by Akira Toriyama, Dr. Slump chronicles the misadventures of Senbei Norimaki, a semi-competent inventor, and his latest invention, a Robot Girl named Arale who appears to be an ordinary human... aside from her superhuman strength and space cadet behavior.

Said misadventures usually involve another of Senbei's inventions going awry, Senbei trying to woo Arale's teacher, the lovely Midori Yamabuki, or Arale and her friend Gatchan (an androgynous baby who hatched from an egg with wings, antennae, and a tendency to eat cars) interacting with the other bizarre denizens of their hometown of Penguin Village. Said denizens include the town police force (which includes a guy in a Star Wars Stormtrooper helmet, a trigger-happy lady cop, and two officers who keep getting their car wrecked by Arale), Suppaman (a short, pudgy, dim-witted Superman wannabe who supposedly gets his superpowers from pickled plums), King Nikochan (a goofy, would-be space pirate stranded on Earth) and Dr. Mashirito (Senbei's rival in mad science who happens to be a caricature of Kazuhiko Torishima, the editor for the Dr. Slump manga).

The original manga ran from 1980 to 1984 in Weekly Shōnen Jump magazine, comprising 236 chapters. It also spawned an animated adaptation, as well as several sequels and a remake. These include:

The first animated adaptation in particular was spectacularly popular, and kicked off what's been called "Toriyama Time" on Fuji TV — Wednesdays at 7:00 p.m. were held by either a Dr. Slump or Dragon Ball series from 1981 to 1999, a period of over 18 years. (And then that was succeeded by the first 63 episodes of One Piece, extending its status as a "Shōnen Jump Anime Block" to nearly 20 years.) There have also been several novels, as well as a radio show starring the keyboardist from the band Southern All-Stars, but we'll leave things here for now.

See you in Dragon Ball!
(If it ever comes out, that is.)