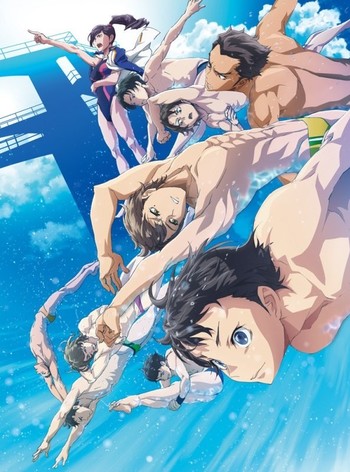 Tomoki Sakai is a first-year middle schooler considers diving to be his only source of freedom, though he's not particularly good at it. Unfortunately, Mizuki Diving Club (MDC), the diving club he belongs to, has been threatened with rumors of closure by the parent company. Things seem bleak, until a new coach, Kayoko Asaki, arrives and promises the Mizuki executives that MDC will send one of their members to the next Olympics in a year's time in order to save the club.
Advertisement:

DIVE!! is a four-book series written from 2000 to 2002 by Eto Mori. It had a shonen manga series serialized in Weekly Shonen Sunday from 2007-2008, but picked up another one later in the seinen magazine Young Ace. It began serialization in July 2017 and ultimately ran for 3 volumes by 2018. An anime series by Zero-G started airing in July 2017 on the noitaminA block.

Outside of 2D, the book series inspired a few live adaptations; a live-action film released in 2008, and a stage play in 2018.

DIVE!! provides examples of these tropes: