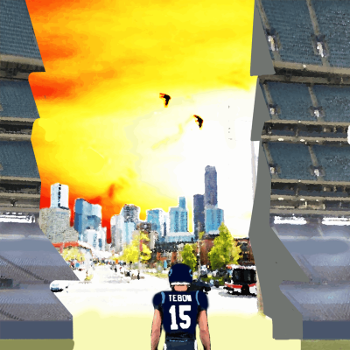 "There aren't any thoughts or words at this point. Indignation is a second or two away. It's like thinking, 'huh?' only you don't know what the word for 'huh?' is."
Tebow: Where's the end zone?
Means: You're standing on it.
Tebow: No, but, like, where do we score?
Means: We don't.
Tebow: Then what do we do?
Means: We whoop their asses, is what we do.
Advertisement:

is a surreal web novel, written and illustrated by Jon Bois, and presented by the sports blog SB Nation in 2014.

In an Alternate Universe, Tim Tebow's

once-promising career in the NFL gets cut short when the whole league decides he just isn't good enough. Determined to continue playing the game he loves, Tebow accepts an offer from the Canadian Football League, signing with the Toronto Argonauts as their quarterback for the 2014 season.

Culture shock sets in, hard, and Tebow struggles to adjust. Canadian football is mostly the same as its American counterpart, but has enough quirks to make it a distinct game. For example, did you know, that under Canadian rules, any unreturned kick that lands in the end zone is worth a single point (called a "rouge")? Did you know that the football itself has a long, retractable tail with fins, and can weigh anywhere from two to thirteen pounds? Have you ever heard whispers of the pure, unbridled insanity of "bound-for-street" play?

On the other hand, being an outsider has its advantages, too. Tim Tebow, unfamiliar with the conventional wisdom of Canadian football, takes an unorthodox approach to the game and soon finds himself breaking records. And then, breaking the game itself. And pressing even further, until he finds the rest of the world has broken around him.

Has a Spiritual Successor in Jon Bois's 2017 multimedia miniseries, 17776.

Due to the impossibility of describing the story in-depth without spoiling at least part of it, all spoilers below are unmarked. It's best if you read the story before reading the trope list so as not to spoil the experience.