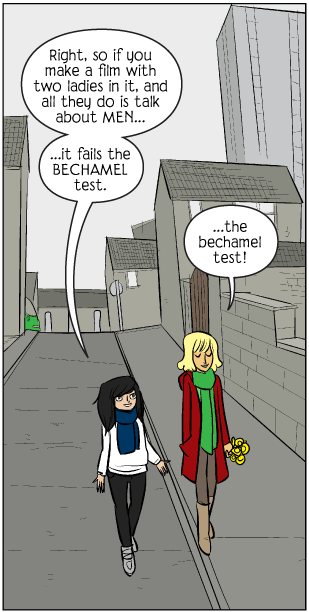 "It means your film is bland and cheesy."
"Your women characters are awful. None of them have anything to say for themselves, and most of them either get shot or stabbed to death within five minutes... and the ones that don't probably will later on."
— Hans Kieslowski, Seven Psychopaths
Advertisement:

The Bechdel Testnote AKA Bechdel-Wallace Test, or the Mo Movie Measure named after Mo, the main character of Dykes to Watch Out For, even though it was introduced in a one-off strip before Mo was introduced is a litmus test for female presence in fictional media. The test is named for Alison Bechdel, creator of the comic strip Dykes to Watch Out For, who made it known to the world with this strip.

In order to pass, the film or show must meet the following criteria:

If that sounds to you like a pretty easy standard to meet, it is. That's the point! Yet, try applying the test to the media you consume for a while. There's a good chance you'll be surprised; mainstream media that passes is far less common than you might think.

The test is often misunderstood. The requirements are just what they say they are; it doesn't make any difference if, for instance, the male characters the women talk about are their fathers, sons, brothers, platonic friends, mortal enemies, patients they're trying to save or murderers they're trying to catch, rather than romantic partners. Conversely, if a work seems to pass, it doesn't matter if male characters are present when the female characters talk, nor does it matter if the women only talk about stereotypically girly topics like shoe shopping or even relationships, as long as it is not relationships with men.

This is because the Bechdel Test is not meant as a moral or ethical judgment on the quality of female characters in a work. Nor is it designed as a judgment on the artistic quality of the work - good movies can fail the Bechdel Test, and bad movies can pass. It is entirely possible for a film to pass without having pro-feminist themes, or even characterizing women positively. For instance, Manos: The Hands of Fate (Manos's wives discuss whether or not to spare the female protagonists so they can also be wives), The Bikini Carwash Company and Showgirls, films whose treatment of women range from incredibly squicky to tasteless fanservice, have passed the test. In fact, the original example of a movie that passes is Alien, which, while it has unintentional feminist subtexts, is mostly just a sci-fi/action/horror flick.

There's nothing necessarily wrong with any film flunking the Bechdel Test. Indeed, there are films with female protagonists that fail it, such as the 2013 movie Gravity, a movie about a female astronaut attempting to survive a disaster in space, in which there are only two major characters, one female and one male. Disney's Mulan shows that a film can even fail the test for the same reasons why it has strong feminist themes: the movie discusses sexism (and overcoming it), and thus is set in a world too sexist for it to pass the test. The protagonist starts out in an environment where women are valued only for their ability to get a man and produce babies, and then moves into an environment where there are no other women at all because it's not allowed. A fair number of top-notch works have legitimate reasons for including no women, such as being set in a warzone. What's a problem is that so many movies fail the test, creating a pattern which says uncomfortable things about the way Hollywood handles gender.

As a phenomenon, the idea of the Bechdel Test has spread far and wide beyond Bechdel's original point and some of the context surrounding it has become lost and misunderstood. While generally taken as a feminist concept, part of Bechdel's original point was about how lesbian women specifically feel isolated from popular media. When there are so many examples that fail, and female characters often spend all their time talking about the men in their lives, women who aren't attracted to men can feel justifiably disconnected and underrepresented. This same sort of detachment can also be applied to other forms of marginalization such as race, disability, mental illness, and other issues, and has led people to create variations of the test that apply to those forms of marginalization, or reinterpret the original idea in new ways.

Variations on the Bechdel Test include:

It's easier for a TV series, especially one with an Ensemble Cast, to pass this test than a film, because there's far more time for the conversation to occur in. To compensate for this, Bechdel-inspired analyses of television often substitute the pass/fail binary with a Bechdel score, looking at the show episode-by-episode, giving a final average (such as 7/13 if seven episodes pass in a 13 episode season), or compare the series's Bechdel score with its reverse Bechdel score.

For other tropes regarding the representation of gender in media, see:

Curious about the pronunciation of Bechdel? According

to The Other Wiki it's like "BEK-dal" (/ˈbɛkdəl/), but Bechdel herself has said it rhymes with "rectal"

.note Cue all the jokes about it being so because to adhere to it is a pain in the ass. Well, they're almost the same, anyhow.

Works that reference the Bechdel Test (named or not):