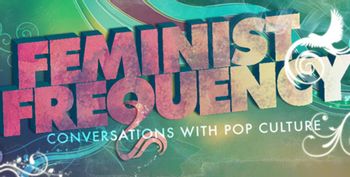 is a web series created by Anita Sarkeesian and co-written by video remixer Jonathan McIntosh to analyze pop culture from a feminist perspective. The point of the series is to point out female character archetypes, mostly negative criticism towards what she regards as the Unfortunate Implications that ensue from various shows and movies. Part of her stated goal is to educate people on feminist theories using pop culture to communicate basic concepts. In addition to covering individual subjects and top best/worst lists, there is a twelve-part mini-series on "Tropes vs. Women", started in 2011.

Near the end of 2012, she announced her "Tropes vs. Women in Video Games" which was planned to have 12 parts when completed. Both works just so happened to use TV Tropes as inspiration. She started a successful fundraiser for her video game videos that later received even more support in response to a harassment campaign against her. The first video of this series was released in March of 2013. She announced in January 2016 that she would be ending the project, citing that she did not feel the passion for the series that she used to have.

Feminist Frequency was later turned into an official non-profit organization. Though started and run by Anita Sarkeesian, Feminist Frequency as a project is technically a group effort. Another contributor is Jonathan McIntosh, credited as a producer (who also has his own channel,

Pop Culture Detective). Game reviewer Carolyn Petit was brought on as a production assistant in late 2014, going on to co-write episodes of the "Tropes vs. Women in Video Games" series and reviewing several games for the channel. The other members of the project choose to remain anonymous.

Feminist Frequency has been known to receive very controversial reactions, so for the love of all that is holy, please refrain from complaining and creator bashing, and keep contributions to facts about the series.