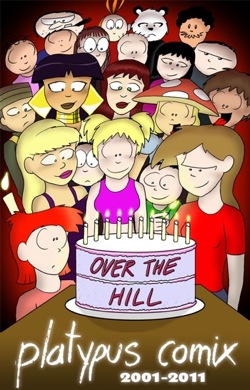 A few of the characters you'll meet at The Site With Everything, plus some from discontinued comics.
"I love entertaining others with this stuff. And I'm always trying to make it better based on their feedback and what they tell me. People need to sit down to whatever you draw for a living, and know—just know—that they're going to have a good time. I don't care if I particularly liked a certain story. What really matters to me is if YOU liked it."
— Peter Paltridge, in response to the FAQ "What's the ultimate advice an amateur cartoonist can get?"
Advertisement:

The self-proclaimed "Site with EVERYTHING!", Platypus Comix

is home to six webcomics, not to mention countless one-offs, all courtesy of one Peter Paltridge. Each is updated one whole story (or at least several pages) at a time, instead of strip-by-strip like most webcomics.

As if that weren't enough, the site is also home to slapdash humor and nostalgia, including TV Guide ad archives, trivia on the Warner Bros.. Silver Age cartoons, and Strip Archives for Bloom County and U.S. Acres. Basically, it's just about anything and everything Peter likes, recapped in a slightly cynical, constantly entertaining fashion.

Comics With Their Own Pages

The site provides examples of:

open/close all folders
Entire Site
The Banner
As a Couch Gag, Peter Paltridge regularly changes the banner at the top of the Platypus Comix homepage to say something new and funny. Examples starring characters from a particular flagship comic appear on that series' page.

Banners include examples of:

, a comic from a discontinued series titled, Guava Guava, his favorite Platypus Comix story. His website only includes the portion written in the year 2001. A recap summarizing the parts written in 1998 explains that Joan of Arc had become a Fish out of Temporal Water, risen from the dead, and fought Osama bin Laden. As this part begins, Joan's period away from battle has led people to doubt her accomplishments and complain that she's not really as tough as they thought. She decides to prove them wrong by confronting Bin Laden again, who had just recently performed his infamous September 11 attacks.

Advertisement:
Miscellaneous Comics
Articles
See Blog.Platypus Comix and The Island of Misfit Christmas Specials
Oh, and if you want to know the names of everyone in that picture: