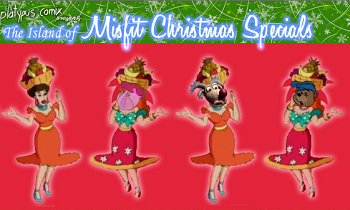 A piece of the index's backdrop, inspired by the "Grandpa's Gonna Sue the Pants Off of Santa" number from Grandma Got Run Over by a Reindeer.* From left to right: IM Slime

and Cousin Mel.
"When Christmas Day is here, the most wonderful day of the year, these specials WON'T be eagerly devoured by yet another generation. If a Christmas special is never happy unless it is loved by a child, then these poor sick puppies must be in the bathroom cutting themselves. 99.9 percent of all new holiday specials fail—it's a cold fact. The reality is that in order to have staying power, a special has to hit exactly the right note of sentimentality and charm. No one can accomplish that by setting out to—it only happens through luck. Consequently, many of today's producers don't even try, figuring their work will be off the air in a couple years anyway and deciding they might as well write whatever they feel like writing. Many of the results from that train of thought (a train with square wheels) are littered throughout this page."
— Peter Paltridge's preface to the page prior to 2012.

The Island of Misfit Christmas Specials

has been an annual feature at Platypus Comix since December 2006. Every year, Peter Paltridge reviews some Christmas Specials that don't receive much attention from the general public anymore. Some of these include gems that the major networks have stopped playing, but most of them simply don't measure up to the classics, to say the least. The majority of specials covered on this site are from the 70's through the 90's, though it has increasingly covered specials from the 2000's and even the 2010's; as of 2019 the oldest special covered is Cricket on the Hearth from 1967, and the newest is Anna and the Apocalypse from 2018. Among all the series of articles hosted at Platypus Comix, this probably has the most installments, even exceeding the comics themselves.

The Island of Misfit Christmas Specials provides examples of: