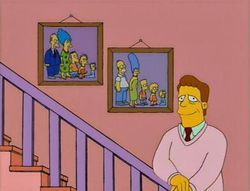 Troy McClure, whom you may remember from such Fox Network specials as Alien Nose Job and Five Fabulous Weeks of The Chevy Chase Show, opens the program with a look at creator Matt Groening — depicted as a crazed, right-wing Southerner who came up with the Simpsons to pay off his gambling debts — and clips from the original The Tracey Ullman Show shorts. After that, there's:

McClure closes the show with the real reason people want to watch the show: "Hardcore nudity!" (albeit PG-rated hardcore nudity).