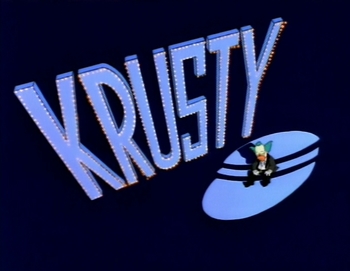 "Send in the clowns..."
Advertisement:

"Krusty Gets Kancelled" is the twenty-second and final episode from the fourth season of The Simpsons. In this star-studded episode, the popularity of Krusty the Klown is eclipsed by a new kids' show starring a wise-cracking dummy. Bart and Lisa then try to save their idol's show by lining up his celebrity friends for a comeback special.

While watching an episode of The Springfield Squares (a show hosted by Kent Brockman and featuring Rainier Wolfcastle, Lurleen Lumpkin, Barry White and Cliff Arquette, the latter of whom is swept by a tidal wave), Homer and Bart watch a teaser consisting solely of the word "GABBO" flashing on-screen. Soon, the mystery gets the whole town hyped. Gabbo is then revealed to be a dummy handled by a strait-laced ventriloquist, whose show will aire directly against The Krusty the Klown Show.

At first, the lavish production and the dummy's smart-aleck personality (reflected in his catchphrase, "I'm a bad wittle boy") are ignored by the Krust, who has already beaten bigger celebrities. However, he is soon forced to fight back with a similar act, but his dummy scares the kids. After Itchy & Scratchy switch to Gabbo's show (meanwhile, Mayor Quimby manages to get re-elected in spite of openly admitting the murder of some political enemies... just by appropriating the dummy's catchphrase), Krusty resorts to air a Dadaist Eastern European cartoon called Worker & Parasite, but this attempt fails and the show is cancelled.

As a result of his spendthrift ways, Krusty soon gets broke and becomes the victim of a prank call by Gabbo. Bart and Lisa, unconvinced by the character's crass practical jokes, decide to take him down: In hopes of damaging his reputation, Bart sneaks in the studio and Gabbo's dissing of the children of Springfield appears on the air, but this backfires. The Simpson siblings find the downtrodden clown begging for food in exchange for pulling his pants down (unfortunately, there's another guy —later on known as the Old Jewish Man— who pulls his pants down for free... and ends up on TV) and bemoaning that everybody else has forgotten him. After seeing photos of Krusty alongside Elizabeth Taylor, Hugh Hefner, Bette Midler, as well with his estranged half-brother Luke Perry, they convince the Krust to do a special show if they get such big names. Their attempt is a success, with Taylor's place (they were rejected by her manager before they could even see her) being taken by the Red Hot Chili Peppers (who arrived in Springfield after being somehow lured to play at Moe's Tavern).

But there's another problem: Krusty has gained a lot of weight after having a milkshake diet instead of having a diet milkshake, so the Simpsons offer to take him as a guest until he gets back in shape. At rehearsals, he gets jealous of Perry's talent, and asks the Peppers to soften their songs. Meanwhile, Sideshow Mel, now working at a fast food restaurant, refuses to do the show after being subjected to years of endless physical abuse.

Krusty's comeback special features an emotional reunion with Mel after singing "Send in the Clowns" and RHCP perform "Give It Away" in their underwear, something that the clown (dressed in an ill-fitting "Buster Brown" costume) finds denigrating. Krusty's old friend Johnny Carson drops in and lifts an '87 Buick while Hefner plays the glass harp, and Midler sings "Wind Beneath My Wings". The special is a success (to the point Liz Taylor decides to fire her agent for rejecting the gig) and Krusty's career is revived. After the show, everybody celebrates at Moe's, and Bart and Lisa earn part of the profits. Krusty is toasted as the best showman in the world—- after Carson, who tap dances and plays an accordion while balancing Grampa and Jasper on his head.