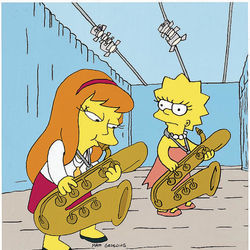 Allison Taylor (voiced by Winona Ryder), a new girl at school, proves to be better at Lisa in the classroom and on the saxophone. Meanwhile, Homer sells sugar found on the street after a truck crash.

This was the first Simpsons episode written by Mike Scully, who eventually became showrunner of seasons 9 to 12.

This also was the 100th episode produced, though the writers always intended "Sweet Seymour Skinner's Baadasssss Song" to be the Milestone Celebration.