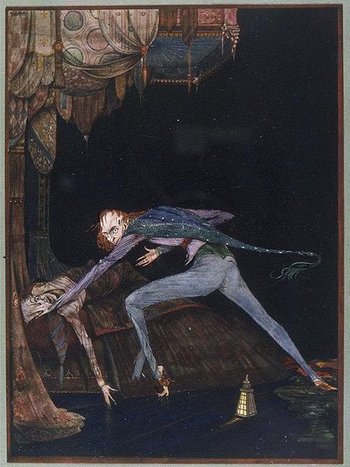 Illustration from the 1919 edition.
"True! —nervous —very, very dreadfully nervous I had been and am; but why will you say that I am mad?"
Advertisement:

"The Tell-Tale Heart" is an 1843 short story written by Edgar Allan Poe. It is a classic of Gothic Horror and one of his most famous, adapted and referenced works next to The Raven.

The narrator tells you nothing about themselves, not even their name or gender, except for the fact that they are not mad! The narrator lives with an old man. The narrator professes to love the old man, but is fixated on the old man's "vulture-like evil eye", to the point that the narrator is driven crazy. The narrator goes on to tell you about the methodical, patient, and extremely thorough way that they set about committing murder.

or hear it read here

In 1953, an animated short film of The Tell-Tale Heart was produced by UPA. It was directed by Ted Parmalee, with the story read by none other than James Mason.

It is the beating of his hideous tropes!: