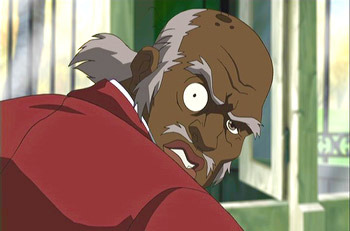 I've got my eye on you...
Advertisement:

If a character is deranged or has just lost it for a moment, one eye is drawn as being very different than the other. Commonly, the Mad Eye (or its iris/pupil) is much larger than the other. Can also double as an unspoken Oh, Crap! moment. For extra effect, may be paired with Twitchy Eye.