Literature / The Tenant of Wildfell Hall 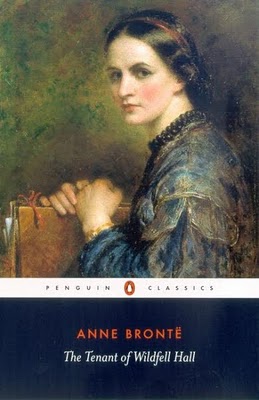 There is such a thing as looking through a person's eyes into the heart, and learning more of the height, and breadth, and depth of another's soul in one hour than it might take you a lifetime to discover, if he or she were not disposed to reveal it, or if you had not the sense to understand it.
— Gilbert Markham to his sister Rose
Advertisement:

The Tenant of Wildfell Hall (1848) was the second and last novel by the other Brontë sister, Anne Brontë. Set in the 1820s, the novel tells the story of Helen Graham (really Helen Huntingdon), who takes up residence at the mostly-decayed Wildfell Hall under distinctly mysterious circumstances. Helen immediately captures the unwanted attention of the local villagers, many of them nasty gossips. More to the point, she attracts our male protagonist and narrator, Gilbert Markham, who (despite some misgivings) falls passionately in love with her. As Helen's diary reveals, however, there's an insuperable obstacle to any relationship with Gilbert: far from being a widow, she's still married.

The novel sold extremely well at first, a close second to Jane Eyre, but its bracing assault on both drunkenness and the sexual Double Standard earned it a scandalous reputation. In fact, Bronte biographer Juliet Barker says it was "so profoundly disturbing to contemporary ideas of decency that it was to sink without trace for almost 150 years after its conception."

Its plot and characters have often been taken as a sly Take That! to both Emily Brontë's Wuthering Heights and Charlotte Brontë's Jane Eyre (the latter of which was written at the same time as Tenant). However, that seems unlikely, given how supportive the three sisters were of each other's work, in a time where it wasn't easy for women to publish novels. Despite its early popularity, the novel slipped into relative obscurity following Charlotte refusing to allow the novel to be reprinted in 1850 alongside Wuthering Heights and Anne's own much less popular Agnes Grey, deeming the work to be "an entire mistake," given Victorians were starting to view Helen Huntingdon as an immoral character and proceeding to judge the by then deceased Anne by association. Critics began to dismiss the book as well, believing it to be a mere manifestation of Anne's bitterness over her brother Branwell, while others have described both Rochester and Heathcliff as idealizations from Charlotte and Emily for Branwell. According to historian Deborah Lutz, it is more likely that Charlotte and Emily were simply influenced by Romantic poetry and the Byronic heroes of their youth, as is evident in most of their work, given their real feelings towards Branwell leaned more towards viewing him as some sort of pathetic figure: Charlotte wasn't exactly tender about Branwell in her letters to her friend Ellen Nussey, and Emily, while being the sister who understood him the most, categorically refused to indulge him and wasn't above getting physical with him. Rather, evidence uncovered by Barker reveals that the novel's plot is more likely to have been based on a local case of extreme domestic violence witnessed by the sisters in the context of their father's pastoral work. Notably the Reverend Mr. Bronte's advice to the beleaguered wife was to leave her husband for her own sake and her child's. She took his advice and it worked out for her. The novel's frank treatment of sexuality and marital decay earned it more attention in later years.

The BBC has adapted it twice, most recently in 1996 with Tara Fitzgerald, Rupert Graves, and Toby Stephens in the leading roles.