Literature / The Tales of Ensign Stål 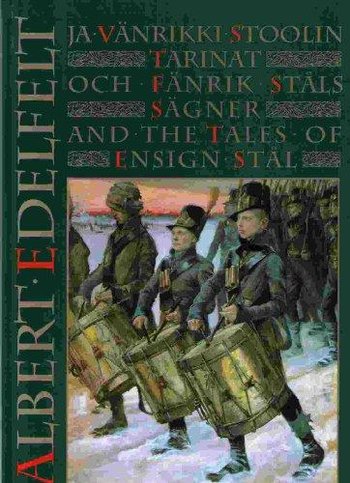 "Our land, our land, our Fatherland!
Ring out, dear word, oh sound!
No rising hill, or mountain grand,
No sloping dale, no northern strand,
There is, more loved, to be found,
Than this — our fathers' ground."
—First verse of "Our Land," the book's prologue and later national anthem of Finland.
Advertisement:

The Tales of Ensign Stål (Swedish title: Fänrik Ståls sägner, Finnish: Vänrikki Stoolin tarinat) is a Finnish collection of poems written in Swedish by the poet Johan Ludvig Runeberg and published in two parts, the first in 1848, the second in 1860. The poems tell the story of the disastrous Finnish war (1808-1809), a part of The Napoleonic Wars where the Russian Empire defeated the Swedish armies and conquered Finland, which had been a part of Sweden since the middle ages. Finland would not become a independent nation until 1917, but during the Russian domination, both Finnish and Swedish speaking Finns developed a strong sense of nationalism. In the genre of this nationalistic Finnish literature, The Tales of Ensign Stål is second only to The Kalevala.

The frame story of the book tells of a young, nameless Finnish student (implied to be a young Runeberg) who befriends an old ensign named Stål, who starts telling the man tales from the Finnish war. Some of the poems talk of real historical people, others about fictional characters. The main theme of the story is a nationalistic love of Finland and a celebration of the bravery of the soldiers in the war. Interestingly enough, the Russian enemies are not demonized, but Runeberg is instead deeply critical of some of the Swedish commanders like King Gustav IV Adolph, or field marshal Mauritz Klingspor, pretty much blaming the disastrous end of the war entirely on them.