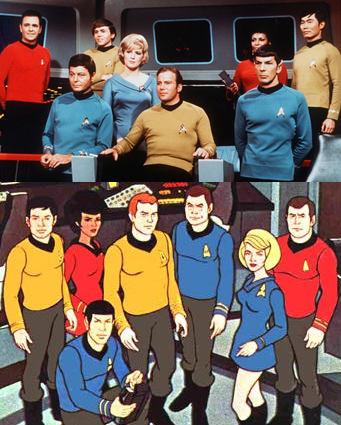 Despite its long-standing reputation as something "for kids", animation is an extremely versatile visual medium. While animation can tell almost any kind of story, its greatest strength is that it can portray stories with relative ease that would be prohibitively expensive and/or extremely difficult (if not impossible) to pull off convincingly in live action. For that reason, animation is an ideal medium for portraying stories with fantastic elements, and many of the world's oldest and most enduring stories contain at least some elements of the fantastic.

So it's hardly any wonder that many existing stories, whatever their origins, have been given the animation treatment. The Animated Adaptation has been around almost as long as modern animation itself: the first major animated feature was based on a well-known fairytale, and almost all major Western feature-length animated films were based on existing ideas until the late 1990s to early 2000s, when original animated features started to gain prominence.

Keep in mind, however, that "adaptation" doesn't necessarily mean faithful adaptation. As with the Live-Action Adaptation, animated adaptations often take liberties with their source material — sometimes to the point of being nigh unrecognizable.

Likewise, animation made for television has a rich history of adapting stories and characters from other mediums — comic strips and books such as Popeye, Superman and Batman being prime examples. The same is true of Japan; as often as not, the hot new anime of each season is more than likely based off manga or light novels.

However, one particularly bizarre trend began back in The '70s: animation studios such as Filmation and Hanna-Barbera would develop animated versions of live-action television shows such as Star Trek: The Original Series, Laverne & Shirley, and Gilligan's Island. Most of these shows are (not unfairly) remembered for being little more than fairly cheaply animated retreads of popular sitcoms, albeit with sillier, more outlandish plots. There were exceptions, though — Star Trek: The Animated Series was an official continuation of its source series, and even involved most of the original cast and writers.

For a video game-specific example of this trope, see The Anime of the Game. Compare and contrast Live-Action Adaptation. In anime, which is frequently adapted from manga, the opposite of this is Anime First.