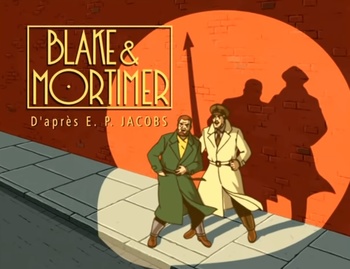 Blake and Mortimer is a French-Canadian Animated Adaptation of the eponymous Belgian Comic Book series by Edgar Pierre Jacobs. It was made in 1997-1998 by Ellipse (which previously co-created The Adventures of Tintin) and Cactus Animation.

The series follows the adventures of two friends, Welsh Ace Pilot and MI5 agent Francis Blake and Scottish Omnidisciplinary Scientist Philip Mortimer, as they battle Diabolical Masterminds and Mad Scientists and try to solve mysteries in a Cold War-esque world.

Blake and Mortimer contains examples of: