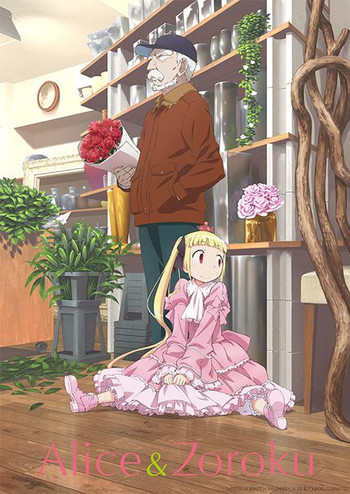 Sana has spent her entire existence in a research facility, being studied because of the unusual Reality Warping abilities she and others possess named the "Dreams of Alice". Sana, however, desires to see the outside world and stages an escape. Soon after doing so, she encounters an old man, Zoroku Kashimura, and takes a liking to him. The feeling is far from mutual at first, but Zoroku and his granddaughter, Sanae, quickly bond with Sana and look after her, even as the research facility that previously had her tries to get her back.

Alice & Zoroku (Alice to Zouroku) is a manga by Tetsuya Imai, which began serialization in Monthly Comic Ryu in 2012. It was adapted into an anime for the Spring 2017 season, that features a mix of Slice of Life and Urban Fantasy as Sana alternately adjusts to life in the outside world and is protected from those who would see her power exploited. The anime is licensed by Bandai Visual and available subtitled on Crunchyroll

and dubbed on FUNimation