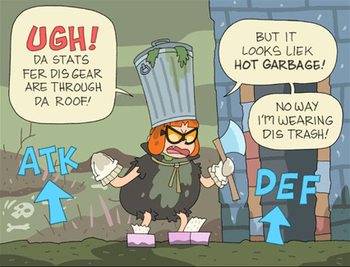 "Reminds me of this one group I ran with. The barbarian in our group found, and I quote: 'a pink frilly tutu of Strength +6', and he wore it with pride for the rest of the campaign."
— KillItWithFire (comment on The Order of the Stick's forum)

A character has an outfit that grants them immense power but there's one major problem: The outfit looks ridiculous and its powers can't be accessed without wearing it. Despite the benefits, the character is usually hesitant or refuses to wear the outfit all together.

This frequently overlaps with Stripperiffic as usually the outfits, while powerful, are often extremely revealing.

Sub-Trope of Clothes Make the Superman. Will always overlap with either Blessed with Suck or Cursed With Awesome, depending on whether the wearer deems its powers worth having to wear such a thing.

Closely related to Rainbow Pimp Gear, where it's a discordant combination of empowering articles that makes the character look silly.