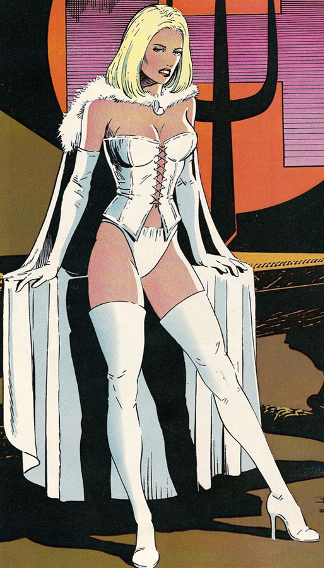 She used to be called "White Queen". This is probably why.
"You like strong women. I’ve done my homework. Or do I need skin-tight vinyl and a whip?"
— Chase Meridian, Batman Forever
Advertisement:

May contain Spy Catsuit and Combat Stilettos. Evil Costume Switch often results in this. The character wearing this might be a Combat Sadomasochist, or an outright Sadist. The Baroness is sometimes dressed this way. Compare Bondage Is Bad. Subversions where the character is dressed like this but they don't fit the personality aspect of this trope fall under Freaky Fashion, Mild Mind.