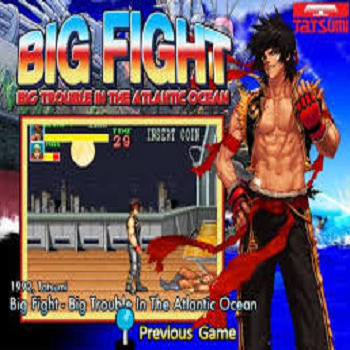 Big Fight: Big Trouble in the Atlantic Ocean (often shortened to just Big Fight) is an Arcade Beat 'em Up (and Fighting Game) created and developed by Tatsumi (creators of the early combat flight simulator Lock-On (no, it's not the one by that title in America) and the racing game TX-1 (the Spiritual Successor to Pole Position II in America, due to being licensed to American publisher Atari) in 1992. It's one of the last games they ever produced before leaving the gaming business to focus in novelty stickers.

The story (if that's how it is...), is that a battleship named SKELTON CREW (that looks like a fairly normal cruise ship on the outside) is being commanded by the notorious Mad Scientist Dr.D, and has set sail on to the Atlantic Ocean, with the standard goal of Take Over the World. So a special force of three fighters are dispatched to put an end to his plans and bring him to justice:

In addition to the three starting characters, you can unlock and play as the defeated bosses (except the last two), each one with his/her own set of moves (with a lame excuse and being Easily Forgiven, though), they are:

In addition, this game included the ability to play it like a Fighting Game, where two players can choose anyone of the heroes and bosses (again, except the final two) for a simple Fighting Game experience.

Now I came to my sense. Can you take me into tropership?