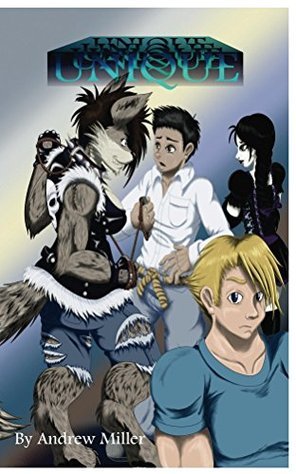 Everyone thinks of themselves as being unique, an individual protagonist surrounded by a supporting cast consisting of everyone else in the universe. Which is actually true. Unfortunately for the solipsists, the same is true of everyone else. Daily life in a city consists of thousands of protagonists wandering around, each of them the star of their own story. So what happens when some of those protagonists think they're especially special, just because everyone else is clearly only natural, rather than supernatural?

Unique is a modern fantasy novel by Andrew Miller, set in an unnamed city that four separate groups call home. The vampires living in stately Semele Manor redefine the notion of the wealthy one percent. The werewolves living on the upstairs floor of their garage fix cars and bikes and trucks for a living, in order to pay the bills and keep the fridge stocked with meat. The Magi hide in plain sight, working their magic and observing their ancient religion. The only ones the cops have any real trouble with are the hunters, who have been slaying vampires and werewolves and other predators of humanity for a very, very long time, and are very good at it. Even if they're presently oblivious to the fact that some of those predators of humanity have a mailing address just up the block. For half a century all four groups have failed to notice each other, moving in separate paths around the city... until this week, when all their orbits finally intersect.

Unique is available at Amazon.