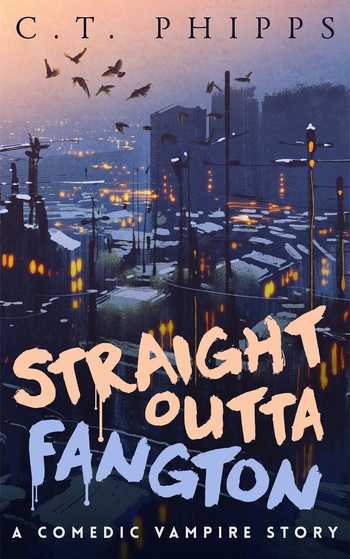 Straight Outta Fangton is Dark Fantasy Urban Fantasy series by C.T. Phipps which takes place in The United States of Monsters series. It is a Affectionate Parody of the genre verging on horror comedy where everyone is a smartass familiar with monster tropes and movies but serious crimes occur.

Peter Stone is a poor black vampire who has been exiled from the vampire-run city New Detroit. Forced to work in a convenience store, he finds himself frequently drug into conflicts among the city's undead as well as conspiracies against the vampire race by the Fantastic Racism-suffering public.

The books are notable for being a World of Snark set in a Broken Masquerade world where vampires have revealed themselves after the 2008 housing crisis. They live in the revitalized city of New Detroit, which they have turned into a massive tourist trap. Not all vampires are wealthy, though. Most of them are actually quite poor, as only the leadership has access to the vast fortune they've made exploiting vampire tourism. The series deals with class issues, race, and also Lighter and Softer depictions of vampires (which is revealed to be an in-universe ploy by vampires to exploit the public).

The books in the series so far are: