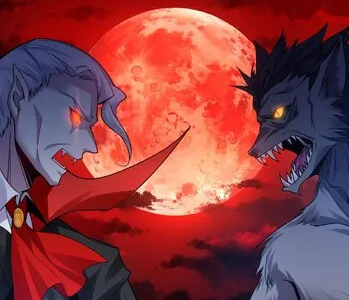 Crange: Werewolf don't look good on a resumé?
Utarefson: Not for vampires, dude! The vampire has always had an enemy in the lycanthrope.
Crange: Like what throat? (SFX: wap!)
— He Is a Good Boy
Advertisement:

In many ways, the legends of werewolves and vampires spring from similar sources, but modern popular fiction has fleshed them out, made them into species, and given them cultural traits.

Like Elves VS Dwarves (or Pirates vs. Ninjas) they probably don't like each other. Wouldn't it be awesome if they fought each other?

And they did. And it was awesome.

Old World of Darkness popularized this trope, but there were some earlier examples. Compare Monster Mash, where they're cooperative, if not friendly. A subtrope of Cool Versus Awesome. In many cases, the most powerful vampires and werewolves could end up locked in an Arrogant God vs. Raging Monster rivalry.

May result in a Vampire-Werewolf Love Triangle, the result of which will be a Hybrid Monster... or a childless marriage. If such a work aims to appeal to the fantasies of those attracted to men, then further contrast is likely to be employed by making the werewolf a handsome hairy bear, while making the vampire a lithe Bishōnen pretty boy. If it's meant to appeal to those attracted to females, the vampire is likely to be The Beautiful Elite while the werewolf will probably be something like a Badass Biker or Amazonian Beauty, and likely to take wearing clothes more as a suggestion than a rule (because Shapeshifting Excludes Clothing is probably in effect).

As a whole, this trope might be Newer Than They Think. In many legends and folklore that mention both vampires and werewolves, the two are not only not antagonistic to one another, they are often connected or are one thing, such as one belief that an improperly disposed of werewolf would actually come back as a vampire. Even Dracula had many werewolfish traits, such as hairy palms and, well, the ability to turn into a wolf.

And yes, we know werewolves have fangs too. We just like the alliteration. Plus, just as how you don't think "zebra" when you hear hoofbeats, you don't think "werewolf" when you hear "fang". Also, vampires may have fur depending on how bat-like they may be, but that's just stretching it at this point. Anyway, on to the examples...

When the Ghostbusters are caught in a fight between two tribes of vampires, it turns into a battle royale when the original citizens of Lupusville are revealed to be werewolves. Egon wisely advises the others they need to leave while they can, as the vampires and werewolves bite each other.

When the Ghostbusters are caught in a fight between two tribes of vampires, it turns into a battle royale when the original citizens of Lupusville are revealed to be werewolves. Egon wisely advises the others they need to leave while they can, as the vampires and werewolves bite each other.