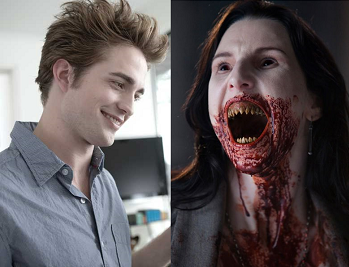 Edward vs. Iris: Vegetarian Love Interest vs. bloodthirsty feral predator.
"So he is a good vampire? I mean, on a scale of one to ten. Ten being someone who's killing and maiming every night, one being someone who's...not."
—Willow Rosenberg, Buffy the Vampire Slayer, "Angel"
Advertisement:

Vampires are an amazing element to add to a work of fiction, or to base one on entirely. They also have a lot of ways they can be... different, not just from humans but from vampires in other works (or within the same one!) But, other than bait for Your Vampires Suck and coolness, what use is making them different? Well, it can be used to establish just how friendly or irredeemably evil they are as a species. A kind of Sliding Scale of Vampire Friendliness.

If the author wants to have sympathetic Friendly Neighborhood Vampires populate the setting (particularly if one of these is the protagonist), there are certain traits that can be added or removed to help skew the scale towards nice without removing the possibility one of them might go off the wagon. On the other, the author might want the story to focus on the Vampire Hunter out to save the world from vampires, so the author can load them up with evil traits and remove the good ones, so that every single bloodsucker his or her protagonist runs into will be Always Chaotic Evil and can be killed without remorse... except for the Defector from Decadence, of course!

Because really, just how friendly can a vampire be if it can only "live" by sucking all the blood from a human? And only humans will do. Conversely, a vampire that only needs a drop of blood a month to get by (and it can be from the blood bank, doesn't even have to be fresh) has no excuse to be all evil other than having been a Serial Killer in life.

So, what can authors add or remove to make friendly/unfriendly vampires?

The friendlier they get on this list, the higher up the What Measure Is a Non-Human? they go, potentially reaching "full human". On the other hand, the nastier they are, the more it will justify bringing out the Torches and Pitchforks, Holy Water, and UV rounds. Exceptions are always possible, but as a race their alignment is more or less dictated by the above.

If the setting falls somewhere in the middle on the "friend-o-meter", then the vampires are no more or less prone to evil than they were as humans... but the slippery slope is always there. Middle of the road friendliness also lends itself well to Van Helsing Hate Crimes, especially when the Vampire Hunter has the wrong idea of where on the scale the vampires he's fighting lie on. The shock of realizing they were Good All Along (or at least had the potential for it) can make for powerful drama.