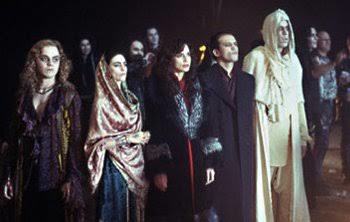 "How did you manage to slip through the fifties wearing red velvet?"
— Lestat, Queen of the Damned
Advertisement:

But are they always snazzy dressers?

Maybe it's because they're old-fashioned or just out of touch with humanity, but sometimes, vampires just can't seem to grasp the concept of contemporary fashion. They'll continue wearing the clothes that were in style when they were still human, hundreds of years ago (in extreme cases, they'll recycle the same outfit until long after it should've fallen apart in the wash). When this happens in groups of vampires, it can lead to Anachronism Stew.

This is a handy visual cue to the age of any vampire appearing in a visual medium, and can, depending on the outfit, be a characterization cue that lets you know this guy is evil.

This trope is becoming less and less popular for live-action features, since it's all but impossible to put a vampire in tights and a doublet in The City and take the character seriously. Or to avoid the Fridge Logic this trope entails, as period costume would presumably wear out after a few decades' use, and similar replacements would get increasingly hard to come by. Conversely, you almost never find a vampire wearing clothes from the 10-20-years-ago low point of the Popularity Polynomial that are considered dated but not yet retro.

Related to Jacob Marley Apparel and Fashion Dissonance. If they can pull it off in style — and few do — it's Awesome Anachronistic Apparel. Compare and contrast Disco Dan. Completely unrelated to the Kingdom of Arendelle's fashion statements.