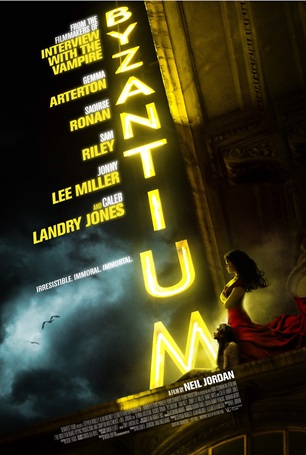 "My story starts with Clara. One day it will end with her."
- Eleanor
Advertisement:

Byzantium is a 2013 British-Irish fantasy thriller film directed by Neil Jordan (of Interview with the Vampire fame). It centres around a mother-daughter vampire duo, who have spent their lives on the run for two centuries.

Clara (Gemma Arterton) and her daughter Eleanor (Saoirse Ronan) have spent decades on the move, never settling too long in one place. When Clara kills another vampire hunting them, they're forced to leave town quickly and decide to lay low in a run-down coastal resort.

After Clara runs into the rather lonely Noel, whilst out hooking for some cash, she convinces him to let them stay at the property his mother left him; the Byzantium Hotel. Whilst her mother starts setting up her business, Eleanor shows increasing signs of frustration and resentment over the life she leads.

Then she runs into a young man named Frank.