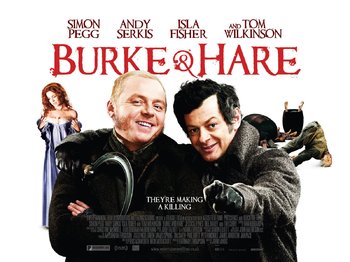 and their killing spree in 1820's Scotland. Burke and Hare are two ne'er-do-wells who hit upon a new source of income: providing anatomists with corpses for dissection and study. When grave-robbing proves to not be a fruitful enough source of dead bodies, Burke and Hare decide to start making corpses themselves—by killing people. Meanwhile, Burke has fallen in love with a retired prostitute who wants to stage an all female version of Macbeth—and the cops are after them. Directed by John Landis and starring Simon Pegg, Andy Serkis, Isla Fisher, Tom Wilkinson and Tim Curry.
Advertisement:

Not to be confused with the 1972 British horror movie of the same name, which is also inspired by the real life murderers.