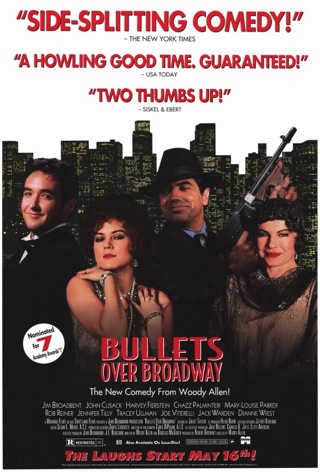 This 1994 film is one of Woody Allen's dramedies on the creative process.

In the 1920s, idealist playwright David Shayne (John Cusack) moves to New York City to produce a play. He and his girlfriend Ellen (Mary-Louise Parker) fit in well enough in the show business world and David finds a mentor in Sheldon Flender (Rob Reiner), a bohemian artist who says that artists can get away with things normal people can't because artists live in their own moral universe.

With the help of his associate Julian Marx, David gets a play produced even though his last two endeavors were flops. Unfortunately there's a catch: the play is backed by Nick Valenti, the head of a violent Mafia gang. Despite worries that he's selling out, David agrees to direct the play according to Valenti's conditions. The main condition being that Valenti's girlfriend Olive (Jennifer Tilly, who earned an Academy Award nomination for her performance) receive a starring role in the play despite her terrible acting skills. Olive's hostile bodyguard Cheech (Chazz Palminteri) is required to sit in on rehearsals and guarantee that everyone treats her right.

The rest of the cast is David's dream cast. He manages to persuade one-time legendary actress Helen Sinclair (Dianne Wiest in her second Academy Award under Woody Allen) to play the lead role, but her overbearing personality and constant demand for script changes proves problematic. David also hires Warner Purcell (Jim Broadbent), an excellent performer with a serious eating addiction.

But the biggest problem is with the play itself. It is pretentious and badly written, so much so that Cheech starts making suggestions on how to improve it. David begrudgingly takes Cheech's writing advice and ends up having to decide whether art or life is more important.