Film / Hannah and Her Sisters 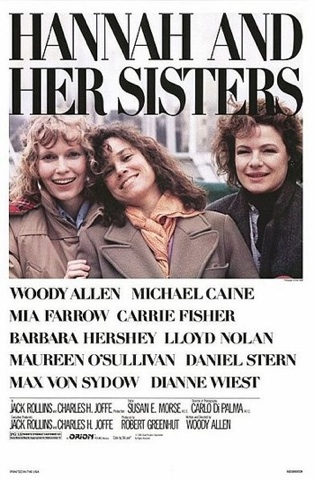 "What if the worst is true? What if there's no God and you only go around once and that's it? Well, you know, don't you wanna be part of the experience? You know, what the hell, it's not all a drag. And I'm thinking to myself, Jeez, I should stop ruining my life searching for answers I'm never gonna get, and just enjoy it while it lasts. And, you know, after, who knows? I mean, you know, maybe there is something, nobody really knows. I know "maybe" is a very slim reed to hang your whole life on, but that's the best we have."
— Mickey Sachs
Advertisement:

Hannah and Her Sisters is a 1986 comedy-drama film by Woody Allen. Until the release of Midnight in Paris in 2011, this was the most financially successful of Allen's films.

The film follows the lives of a dysfunctional family between two Thanksgivings. Hannah (Mia Farrow) is a successful actress, wife, mother, and sister. As the oldest daughter of actors Evan (Lloyd Nolan) and Norma (Maureen O'Sullivan), she shoulders the difficult task of keeping the family balanced.

Meanwhile, Hannah's ex-husband Mickey (Woody Allen) has a crisis of his own as he tries to balance his job as a television producer with his crippling hypochondria and fear of death. Relationships and affairs evolve in surprising ways and it all leads up to one final Thanksgiving, three years after the start of the film, that finds everyone in situations they never expected.