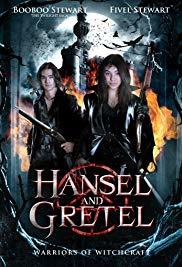 Hansel & Gretel: Warriors of Witchcraft is a 2013 horror film directed by David DeCoteau, featuring Eric Roberts and Cherie Currie and distributed by Lionsgate.

Ella and Jonah are twins who have gained a scholarship to a prestigious school. Despite being bullied for being working class, Jonah is eyeballed by the other top students for joining "the Circle," a coven in the school that performs Human Sacrifice to a powerful witch's spirit to secure their futures. Meanwhile, Gretel discovers their heritage as witch hunters. Revealing this to Jonah, the twins team up to stop the Circle once and for all.