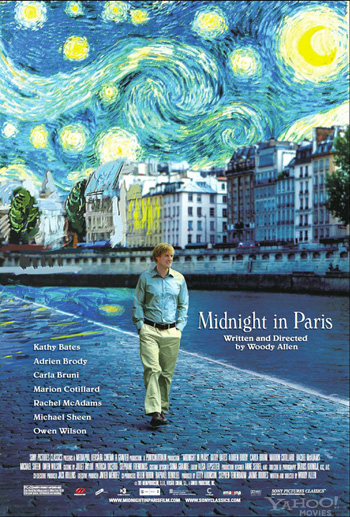 "If I could live anywhere, it would be a night in Paris in the 1920s."
— Gil
Advertisement:

Midnight in Paris is a 2011 romantic-fantasy-comedy film directed by Woody Allen.

Owen Wilson — the latest actor to be handed Allen's "screen persona" nebbish character — plays Gil, a hack but successful Hollywood screenwriter who dreams of writing novels. He and his fiancée Inez (Rachel McAdams) are visiting Paris with her parents; Gil falls in love with the city while Inez dreams of living in a Malibu suburb. One night, as Inez and her friends go out dancing, Gil takes a walk and discovers a square where every night at midnight, a magic car shows up that transports him to 1920s Paris. Enamored with the culture and the famous historical figures he encounters, he continues to travel there, much to Inez's anger and suspicion.

Midnight in Paris contains examples of: