Film / Children of a Lesser God 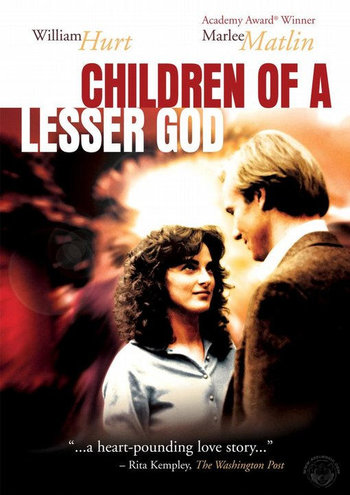 Children of a Lesser God is a 1986 film directed by Randa Haines, starring William Hurt and Marlee Matlin.

James Leeds (Hurt) is an educator and speech therapist who gets a job teaching at a school for the deaf somewhere in New England. Soon after taking the job he meets Sarah Norman (Matlin), a deaf woman and a former student at the school who is now working there as a janitor. James is intrigued by the fiery, hot-tempered, and extremely good-looking Sarah. Soon they have fallen in love and moved in together. However, Sarah's angst and childhood traumas, and James's fundamental inability as a hearing person to appreciate the life of a deaf person, threaten to split the couple up.

Adaptation of a stage play that won a Tony. Debut feature of Marlee Matlin, who won an Oscar for this part and remains the youngest woman ever to win an Academy Award for Best Actress.