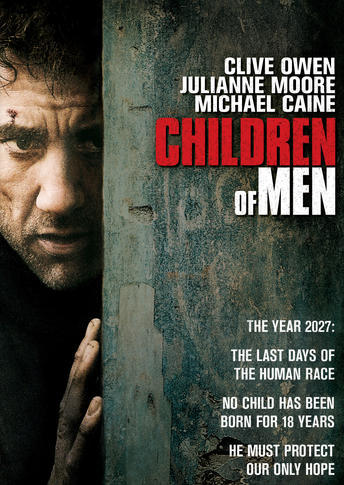 Humanity is now an endangered species…
"Last one to die, please turn out the light."
— Graffiti sprayed on a wall
Advertisement:

Children of Men is a 2006 childless dystopian apocalyptic Science Fiction film co-written and directed by Alfonso Cuarón (Harry Potter and the Prisoner of Azkaban, Gravity) starring Clive Owen, Julianne Moore and Michael Caine. It is loosely based on the novel The Children of Men by P. D. James.

It's 2027, and no child has been born for nearly two decades. It appears that the United Kingdom has one of the only functional governments left in the world, albeit barely, and British society teeters on the verge of collapse due to the problems thrown up by a long economic decline, totalitarianism, refugee ('fujee) crisis, and terrorism.

Theo (Owen), a white-collar worker, is distracted from his rut when he is abducted and his ex-wife Julian (Moore) approaches him for a favor: to help smuggle a refugee girl named Kee (Clare-Hope Ashitey), who happens to be pregnant, out of the country. Theo agrees to protect Kee on a dangerous journey — past rebels, a repressive government, and traitors — to see her to safety.