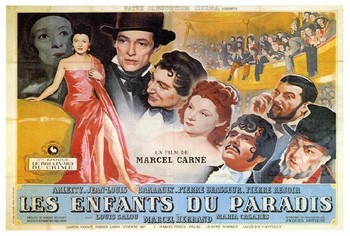 Children of Paradise (French : Les Enfants du Paradis) is a 1945 French drama film, directed by Marcel Carné and written by poet Jacques Prévert. Set in Paris during the "July Monarchy" of the 1830s and revolving around the Théâtre des Funambules — a pantomime theater — and its comedians, along with a beautiful courtesan named Garance, it is both a love story and a tribute to theater. The film itself is divided in two parts named era : the first era is Boulevard du crime and the second one is L'homme blanc.

The story follows the meeting between Garance (Arletty), an independent and quick-witted woman, and Baptiste (Jean-Louis Barrault), who works as a mime at the Funambules. While they are quick to develop feelings for each other, several events, and a difference in mentalities, prevent them from being together. Several years later, Garance comes back, only to find a lot has changed during her time away. Every evening, though, she goes to the Funambules to see Baptiste play...

"Tropes are so simple":